The next PlayStation 4 firmware update is adding some long-requested, crucial features, along with Boost Mode which improves frame rates on PS4 games which haven’t been patched for PS4 Pro. 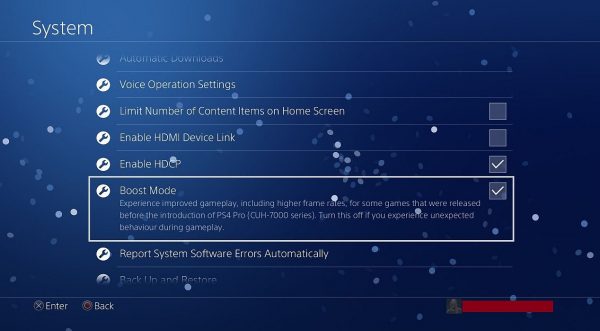 Sony has confirmed Boost Mode after images of the option were posted by those participating the firmware 4.50 beta.

According to The Verge, Sony confirmed “Boost Mode lets PS4 Pro run at a higher GPU and CPU clock speed in order to improve gameplay on some PS4 games that were released before the launch of PS4 Pro.”

This backs up what the screenshots taken by beta testers already confirmed, but, it’s nice to know anyway.

A report from Digital Foundry is in the works, and once the feature is tested, we’ll let you know.

A beta for update 4.50 started rolling out today, and some testers have a found a Boost Mode feature for PS4 Pro not listed publicly by Sony.

The images, one out of Japan posted on NeoGAF (thanks, Hcw247), states users can “enjoy high-quality gameplay such as improved frame rates” when playing games released before PS4 Pro went on sale.

If the user encounters issues when this mode is on, since it is optional, it can be turned off.

What Boost Mode apparently does is help graphically intense games which tend to drop in frame rate maintain a a more consistent rate. However, games which have a locked frame rates won’t go above the cap.

Again, Sony has yet to update the list of features for 4.50, but since the firm said “other features” would be announced at a later date, we expect Boost Mode to be one of them.

Sony recently announced it’s looking for players to test the upcoming PS4 firmware. No details were revealed at the time, but we now know what update 4.50 is going to bring.

In a blog post, Sony confirmed that invites will begin rolling out today for those who registered.

As for what’s coming with 4.50, codenamed Sasuke, there’s a whole lot of good news.

Finally, Sony is adding support for external hard drives. After taking the update, you’ll be able to store content (including games and add-ons) on any USB 3.0 HDD, similar to what you can currently do on Xbox One.

HDDs up to 8TB in size are supported, and you’ll even be able to download and install directly to the external storage. Anything installed on the external unit will appear in the Content Launcher of the home screen.

You can also move content from the internal HDD to the external.

Also like on Xbox One, the update will allow you to use any screenshot as a background for the home screen. You’ll have some control over it, too, like adding shadows to text, and dimming the Function Area to make system icons easier to see.

The Quick Menu, which received a decent refresh in update 4.00, will be getting updated again. It will now cover less of the screen, and will let you create and join parties straight from the Online Friends section.

Previously, you had to open the Party App to manage party invites.

The Notification list, which previously had multiple categories on the left, will now be shown in one list. You’ll now also be able to customise which pop-up notifications appear on the screen, and turn off the ones you don’t want to see.

The update brings support for 3D Blu-rays for use with PlayStation VR. This means you’ll be able to watch 3D movies through the headset.

The Activity Feed, available under What’s New, among other places, will now allow you to add content directly to it. You can post text, screenshots, and gifs into your feed.

You’ll be able to tag games and other PSN users. The Live from PlayStation app will also now show all screenshots shared publicly by users.